Back to the main menu.

9th February 1946 – Bolshoi Theatre Speech – Stalin made a speech to the Bolshoi Theatre broadcast live to Russia in which he stated that Capitalism progressed through war and that war between East and West was therefore inevitable. More importantly, he accused America of using the Atomic Bomb for imperialism.

February 1946 – The Long Telegram: Soon after the speech, in February 1946, Truman received a secret report from George F. Kennan, America’s ambassador in Moscow since 1933 (the so-called Long Telegram). So the Telegram was addressed to the President, but it would later be published and read by many Americans as a paper entitled ‘The Sources of Soviet Conduct’

The Telegram reported that:

Above all Kennan stated that the Soviets WOULD back down against a show of force. This idea, developed by the American government, eventually turned into the Truman Doctrine, and the policy of containment:

Soviet power … does not work by fixed plans. It does not take unnecessary risks. Impervious to logic of reason, it is highly sensitive to logic of force.

These ideas became the basis of the idea of ‘containment’ in the Truman Doctrine announced by Truman in March 1947.

Kennan stated his belief that, if the US had the ‘courage and self-confidence to cling to our own methods and conceptions of human society’, and if ‘our public is educated to realities of Russian situation’, the menace of Soviet Communism could be resisted. This would best happen, he said, by making sure that people remained wealthy, happy and secure, and by waging a propaganda war to make sure that they were aware of the benefits of Western Freedoms. This became the basis of the Marshall Plan. More specifically, as a result of the Long Telegram, the USA put pressure on Russia to withdraw from Iran, it stopped giving loans for the reconstruction of Czechoslovakia, and made plans for interventions in Greece and Turkey to help democratic governments there.

March 1946, Iron curtain speech: At Truman’s invitation, Churchill made a speech at Fulton Missouri, in March 1946, synonymous with the phrase ‘Iron Curtain’ and which denounced the Soviet sphere for exerting a very high and increasing measure of control over ancient European cities, from Moscow.

Stalin’s response (March 1946): Stalin responded by declaring that Mr Churchill was a warmonger [clearly an insult, since it is far worse to be a warmonger than a cheesemonger, fishmonger or ironmonger -ed.]; that Churchill was not alone, that he had friends in the US as well as the UK, and that they bore a striking resemblance to Hitler and his friends!

The Novikov Telegram (September 1946): The Soviet ambassador to America, Novikov sent a similar secret telegram to Stalin in September 1946, whose complete text can be found here, that had a similarly worrying effect on Stalin and his advisers. It said that America:

The Truman Doctrine and the Marshall Plan were direct responses to Soviet expansion and the Long Telegram. These marked the formal adoption of the advice given by Kennan on how to prevent the spread of Communism. The trigger event for the speech that contained the new doctrine of containment – was Britain’s inability to continue fighting the communists in Greece. When Britain asked for American help in March 1947 Truman sent aid and supplies. Greece mattered because it was considered a strategic lynch-pin for three continents – Europe, the Middle East (Turkey in particular would be at risk if Greece fell) and North Africa. As a result, Truman made a speech to Congress in which he set out a new policy to deal with the threat of communism, which became known as the Truman doctrine. It declared that the world had a choice between communist control or democratic freedom; he declared America’s abandonment of its traditional isolationism and though he didn’t use the expression, the adoption of a policy of containment. He did talk about the USA as the ‘world’s policeman’ and being willing to send aid and supplies to countries trying to remain free of communism.

The Marshall Plan became the ‘European Recovery Programme’ or ERP. It involved sending over $12 billion (roughly 100 billion in today’s terms) to help western Europe’s recover from the devastation of WWII. America’s thinking was straight forward: poverty made countries susceptible to communism. If Europe could be helped back to recovery, not only would America prevent the spread of communism, but it would also help Europe contribute to the growth of the world economy again. Much of the aid came in kind, so the American taxpayer funded a boom in American industry and American companies benefited from the ERP.

Although aid and supplies were forwarded to Greece and other European countries, it was only in March 1948 that Congress gave its formal approval – because of news of the Communist crackdown in Czechoslovakia which saw the defenestration of Jan Masaryk and later the the removal of Edvard Beneš. 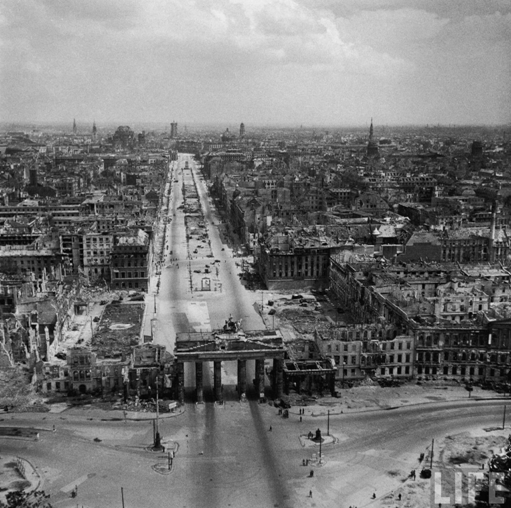 Consequences of the first Berlin Crisis

Back to the main menu.