Causes
Since the Soviet occupation, Hungary had suffered economically under the restrictions of Comecon which forced the country to send its best agricultural and industrial products to Russia, to over-specialise and to depend upon other satellite states for necessities. Culturally, the Soviet Union had cracked down hard on the Catholic Church, placing Archbishop Mindsentzy in prison, took control of education and restricted free speech. 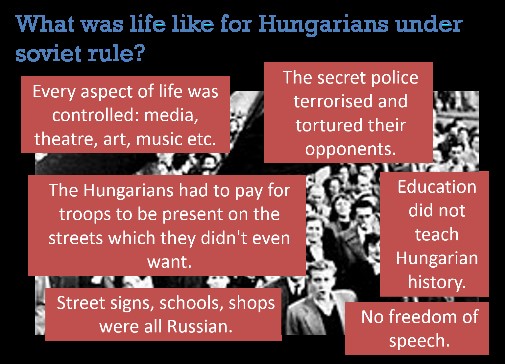 Matyas Rakosi was replaced by the reformer Imre Nagy, but after two years in which he promoted his ‘New Course’ in Socialism, Nagy fell out of favour with the Soviet Politburo. Matyas Rakosi returned to power, but not for long.

Khrushchev sought a more liberal approach to government and sought to distance himself from Stalinism. He gave a ‘secret speech’ in 1956 promising ‘peaceful co-existence’ with the West and an end to Stalinism.

In June 1956, prompted by de-Stalinisation and by events in Poland where the Soviets had permitted Gromulka to remain in power despite leading a revolt against the Soviet Union, the Hungarian people began to protest against Matyas Rákosi’s regime. As a result Moscow replaced him as prime minister with Andras Hegadus (Ernő Gerő became First Secretary of the Communist Party of Hungary in place of Rakosi). But Hegadus more popular than Rákosi had been.

On October 23rd 1956, students took the streets and were supported by workers and the Hungarian army. Although Soviet tanks were brought in to quell the unrest, the Soviets agreed on the 24th to the formation of a new government under the leadership of Imre Nagy once again – and five days later, on October 28th, Soviet tanks began to withdraw upon his request. Confident of American support, Imre Nagy passed a number of reforms between the 29th October and the 3rd November:

On 1 November, Imre Nagy announced the decision to introduce free elections and to leave the Warsaw Pact – an act which threatened to destroy the unity of the Soviet block and weaken the defences of the USSR. At this point, facing pressure from within Moscow politburo, and from Mao Zedong who criticised Khrushchev’s ‘de-Stalinisation’ policies as a ‘revisionist’ betrayal of the Revolution, the Soviet Union mounted an invasion.

More videos about the Hungarian uprising can be found here.

There were FIVE reasons why Khrushchev acted harshly in Hungary:

TWO reasons why the West did not help Hungary: