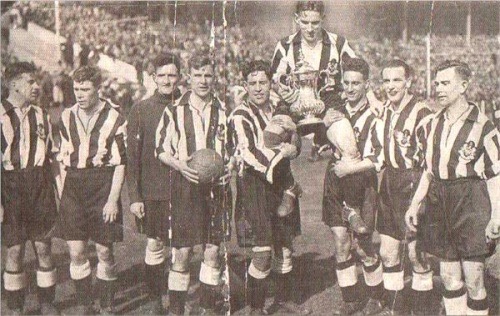 Before the First World War, sport was already a major part of English life. Association football was the working man’s sport. It began with a series of meetings in the Freemason’s Tavern in London in 1863; in 1871 the rival Rugby Football Union was formed, those who followed Association Football’s rules played soccer.

The Football Association cup was the competition that saw a common set of rules established between the Association and the Sheffield Football Association. In its early days the FA Cup was dominated by the old boys of the public schools: the likes of The Wanderers and The Old Etonians. However, 1882 saw the victory of Blackburn Olympic; the next four would see Blackburn Rovers triumph. The Blackburn clubs, like the midlands rivals who followed (such as Aston Villa) to many of those southern clubs cheated: they had working class and, increasingly, professional (at first Scottish) players. When Olympic won, many players were being given under-the-counter jobs. By 1885, the FA caved in: football became professional and, overwhelmingly, working class.

By 1901, even London working class teams were winning (I’m a Spurs fan, I had to put this in).

Professional football rapidly became the people’s game. The most malus footballer before the First World War was a goalkeeper, Fatty Foulkes, a 20 stone Leviathan (handy in an age when barging a keeper into the net was allowed):

Football became the working man’s spectator sport. Legend has it that only one horse cleared the crowd of the 1922 final (the photo at the top shows that to be an urban myth).

Crowds were local (Saturday morning work meant there were no away fans, except for Derbies), and the players were local celebrities. But, with the advent of radio and the cinema newsreel, national stars emerged. Players such as Dixie Deans and Stanley Matthews became national heroes, Matthews even more so after the war. For a Spurs fan, the most galling admission has to be that the outstanding English team of the era were Arsenal: under Herbert Chapman winning the FA Cup twice and the less important League five times. Arsenal were also the first club to attract middle class support in any significant numbers.

Proof that this was an alien age was the fact that in those days Newcastle United won trophies: the League in 1927, the Cup in 1924 and 1932…

International football mattered little. England didn’t enter the first world cups, and internationals weren’t even played at Wembley. The most infamous football match odd the period was a friendly, in Germany in 1938.

On the advice of the foreign office, the team gave the Hitler salute.

And who said sport and politics don’t meet….

1 thought on “The Sporting Life: Football until the Second World War, the Days When Newcastle Won Trophies”