These elections mattered, overturning Labour’s landslide victory of 1945 and ushering in 13 years of Conservative government. To understand why this happened, we first need to understand exactly what happened. The devil is very much in the detail. Let’s begin with the 1945 landslide (click on the link to view the result in full).

And with the electoral map of the same result. 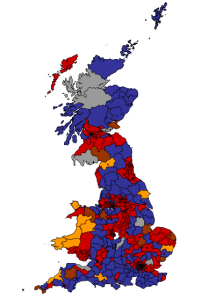 There are perhaps two points to note about the 1945 result. The first is that the Conservative vote was not wiped out: the gap between Labour and the Conservatives was enough to give Labour a landslide, but the Tories still polled just shy of 40% of the popular vote. The second is the fact that Liberals polled 9%.

The 1950 result saw Labour’s landslide majority all but wiped out (again, click on the link).

In the first place, on a record 84% turnout, we can see both Labour and the Conservatives gained votes, but that the Conservative increase to 43.5% of the popular vote was enough to win them 77 additional seats and bring Labour to the brink of losing its majority. That swing, of just 2.7%, is hard to analyse constituency-by-constituency, because of the new boundaries that followed the Representation of the People Act of 1949. Those changes are thought to have helped the Conservatives. Attlee could have postponed them, but characteristically chose to take the moral high ground. For our purposes, they make the 1950 result harder to interpret. However, a look at the electoral map of 1950 does tell a story.

It seems evident that Labour lost many seats south of the Trent. That relatively small swing was, in fact, much larger in the constituencies in London and the South East that had not changed, averaging at around at 7%: the seats of Wembley North and South, both of which were won by the Conservatives having been won by Labour in 1945, saw swings to the Conservatives of 10%. If we compare constituencies that were broadly similar to those of 1945, those that the Conservatives won from Labour almost all had swings of close to double or more than that of the national average. This was enough to deliver the Conservatives a raft of seats across the whole country, but especially in the Midlands, London and the South East. If we accept that the swing was often much larger in seats that Labour lost, then that swing cannot be ascribed to the middle class alone (even though they may have made up the lion’s share of those who switched to the Conservatives).

What is also notable is the resilience of the Labour vote; it would, famously, reach its zenith the following October. What the precise figures must do is make us cautious in ascribing the collapse of Labour’s landslide majority to the idea they lost support in general over this or that issue. Famously, Labour would poll their record share of the popular vote in 1951 (again, click on the link).

This is the only modern general election in which one party won on the popular vote and the other won an overall majority. There were two related stories going on here. The first was the fact that the Conservative share of the vote increased by 4.5% to 48%, winning them 31 additional seats and giving them their majority. The key to understanding the 1951 election is the collapse of the Liberal party. In one sense, the 1950 election saw the Liberals make a significant mark, they fielded 475 candidates and their share of the vote held at 9%. In fact, that represented a decline in one sense, they had the same share of the vote with just 306 candidates in 1945. A minority, but not an insignificant minority, of those seats that Labour lost in 1950 saw a switch of votes from the Liberals to the Conservatives: Banff saw the Liberal vote decline by 14%, Brecon and Radnor by 13%. In others, where no Liberal stood in 1945, Liberals took votes from Labour in 1950: in Thurrock, Labour lost 10% of their 1945 vote to a Liberal candidate. Most ominously, where there had been a Liberal candidate in 1945 and there was no Liberal in 1950, those votes went overwhelmingly to the Conservatives: as in the case of the Isle of Wight, for example.

In 1951, the Liberals were financially and politically exhausted: they fielded just 106 candidates. It seems self-evident that a substantial majority of those who had voted Liberal in 1950 voted Conservative in 1951. Of the 20 seats Labour lost, 14 of them had no Liberal candidate in 1951, whereas they had a Liberal standing in 1950: in each case, the Conservatives won the lion’s share of those former Liberal votes, enough to win them the seat (two others saw a collapse in the Liberal vote, and the Conservatives reap that dividend). Meanwhile, Labour piled up votes in safe seats: of the 60 biggest majorities, Labour had 50. In short, as it would henceforth, the electoral system favoured the Conservatives.

Thus, we can draw two important conclusions. The 1950 election all but wiped out Labour’s landslide  majority, based primarily upon a swing to the Conservatives of just 2.7% nationally, but of a much greater extent in key seats, notably south of the Trent. Then, in 1951, whereas Labour’s popular vote reached record levels, the Conservatives increased their popular vote by 4.5% and, most importantly, those ex-Liberal voters delivered the key marginals that allowed the Conservatives to secure a narrow, but secure, overall majority. It is fact that we need to explain in the next article.