Much of this series had recently been about violence, bigotry and misery. So, time for some football. And for once, football as an antidote.

Think of something something quintessentially English, and Jack Charlton could be it. Charlton was born and bred in Ashington, Northumberland. Like many mining communities, it was and remains famous for its sportsmen. Charlton, along with his younger Bobby, came from a footballing dynasty. He was cousin to Jackie Milburn, the legendary Newcastle centre forward. No fewer than four of his uncles were professional footballers, three playing for Leeds United.

Charlton was on Leeds’ books aged 17, and had made his first team debut before going to do his national service. After returning he had a pretty mixed career and, to cap it all, Charlton was already in the shadow of his prodigiously talented brother Bobby who, by 1958, was one of the brightest stars in the game; he would be one of the greatest English players of them all and, indeed, a knight of the realm. By contrast, Jack was tall, rangy and could never have been described as an elegant player: built, you might think, to be the epitome of the old-fashioned stopper.

That was when Don Revie came to the club, first as player, then player-manager and then manager outright. It did not go well for Charlton. Revie nearly sold him in the summer of 1962. It all changed that September when, frustrated with the old guard, Revie started to play younger players and Charlton helped persuade his manager to move to a zonal defence rather than man-marking, which also enabled Charlton to discipline himself as the organiser of what became the meanest defence in English football. Just as importantly, Charlton formed a formidable partnership with the young Norman Hunter.

By 1964, Leeds were in the top flight and in their first season lost the League on goal difference and were FA Cup runners-up too. Come 1966, Charlton was a fixture in the England back four. If his brother personified the modern, stylish element in Sir Alf Ramsey’s great side, Jack was very different. In many ways Charlton personified one very English side of the game in the ‘sixties, with a hard-nosed professionalism, uncompromising physicality and perhaps even a touch of cynicism. Its certainly true to say back in the day, Revie’s Leeds were the team everyone loved to hate.

Charlton’s first team as manager, Middlesbrough, went from the second tier to fifth in the top flight in the 1974-75 season; in that season, and the next, they topped the First Division at some point. They did so by playing some pretty ugly football, notable for their packed defence and effective use of the long ball. After unhappy spells at Sheffield Wednesday, Middlesbrough again (for just two months) and Newcastle, by 1985 it seemed as if his career might be over.

Then in December 1985 Des Casey, President of the Football Association of Ireland, rang out of the blue to take him on. It seemed, at the time, in all sorts of ways, an unlikely appointment, and for all sorts of reasons.

In the first place, sport in Ireland had always been bedevilled by political complexities. The biggest sports were the Gaelic games, then as now, football and hurling. Like most modern sports, these were a creation of the late 19th century. It was then that sports such as Rugby Union and Association Football (soccer) were formalised and codified. At the same time, a new nationalist sporting movement grew up in Ireland in the form of the Gaelic Athletic Association, designed to promote ‘native sports’ against ‘foreign’ games.

The GAA was an all-Ireland organisation, as was the Irish Rugby Union. The problem was that both failed to cross the sectarian, class or political divides that plagued 20th century Ireland. With the notable exception of Limerick, Rugby was overwhelmingly middle class; in Northern Ireland, it was middle class and Protestant. The GAA forbade its competitors from taking part in ‘foreign sports’, and was overwhelmingly Catholic.

Soccer was divided by a border: Northern Ireland had its own FA, and competitions, and international team. That is not to say Ireland did not produce some great players. Even if the Republic had never produced a George Best, in the 1980s there were some very fine Irish players, such as the Arsenal trio Frank Stapleton, David O’Leary and the brilliant Liam Brady; there were Mark Lawrenson and Ronnie Whelan from the dominant Liverpool, as well as Manchester United’s Paul McGrath and Kevin Moran. However, whilst Northern Ireland had reached the 1982 World Cup Finals, famously beating the hosts Spain, the Republic had underperformed.

Charlton’s philosophy was, at heart, simple: press the opposition and stop them playing, move the ball up front quickly. It was good enough to get Ireland to the 1988 European championships and, as the draw would have it, their first opponents were England. An early Ray Houghton goal, some canny tactics which saw Charlton outwit England’s Bobby Robson, and a couple of vital saves from Packie Bonner were enough.

In the end, a Dutch fluke saw Ireland knocked out in the group stage, but it almost didn’t matter. Soccer’s hour had come. All of a sudden, all across Ireland, a nation was transfixed and bursting with pride. With that first game being against the English, one might have expected a wave of nationalist passion akin to what one might find when England play the auld enemy, Scotland. And passion there certainly was. However, something wasn’t there. 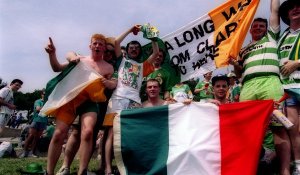 What certainly was there, in spades, was the Irish tricolour. Flags are interesting. For many nations, their flag is a simple symbol of patriotism. My wife is half-Danish, and the Danish flag is wheeled out by Danes at every conceivable opportunity with a rather joyous pride. But flags can be politically poisonous as much as they can be celebratory, or a focus for unity. In England, the union flag and the cross of St George have so often been hijacked by a nasty xenophobia or even racism, that their own flags make many English people feel distinctly uneasy. In Ireland, especially in the North, the tricolour is loaded with a political message that makes it divisive. I can remember being in Ireland at the time of the IRA hunger strikes in 1981, the Irish tricolours flew alongside black flags both loaded with a strong political message which was often loaded with a virulent Anglophobia. That kind of Anglophobia also affects sport: so often, in recent times, the Anglo-Scottish rivalry has been bedevilled by a nasty, virulent Anglophobia.

At the time of that England game, or for Italia ’90, you couldn’t move for tricolours. But there was not a sectarian, nor political, nor Anglophobic note. Sure, the whole of Ireland loved getting one over the English that day. But it was joyous celebration of being Irish. Here’s Christy Moore’s version:

Perhaps one reason for the lack of Anglophobia was the nature of the Irish side. Its manager was wholly English, though one of those Englishmen who always felt instinctively at home in Ireland. As Charlton himself later said about taking the Irish job:

“I like Ireland. I like the Irish people, I like a pint of Guinness, I like the craic. I like the fishing in Ireland – in fact, I like it so much that I’ve bought a house on the west coast there with a friend, to serve as a base when we go fishing.”

And then there was the team. For every Irish accent, there were a variety of others that reflected the nature of the Irish diaspora and Charlton’s determination to recruit anyone who could possibly qualify. We had Ray Houghton’s Glaswegian, Mark Lawrenson’s Lanacastrian, Mick McCarthy’s broad Yorkshire; we had scouse, cockney. Most famously, Tony Cascarino turned out to have no Irish family at all.

And then there were the fans. Nowadays every Irish footy fan has their premier league team, but even then Liverpool, Manchester United and Arsenal had substantial support bases in Ireland. On top of that, was the Irish diaspora in England. More even than that: with the exception of their games against England, huge numbers of English fans adopted Ireland as their second team in 1988 and Italia ’90; in 1994, for many Ireland were the team they supported when England failed to qualify.

Charlton’s Ireland had their finest hour in Italia ’90: who can forget that penalty shoot out? When Packie Bonner saved, and David O’Leary scored Ireland were in the quarter-finals, and there very much on merit. Here is how Roddy Doyle’s The Van has it:

By now, the Irish fans were as much the winners as anyone else. Italia ’90 changed football in many ways, helping rid football in England of its natural association with racism, hooliganism and a vicious xenophobia. Unfortunately, it would take many English fans a long time to catch up, as the terrible scenes at Lansdowne Road in 1995 would testify. Not that all Irish fans were perfect that night: some booed God Save the Queen. But a group of English fans were far, far worse: chants included a tasteful Sieg Heil, there was the inevitable ‘no surrender to the IRA’ and some gave Nazi salutes when the Irish national anthem came. A riot stopped the game.

And those same English fans were chanting ‘Judas, Judas’ at Jack Charlton.

How wrong could they have been? Famously, Saint Jack can never buy himself a pint in Ireland, but he is also revered in his beloved Leeds and native North East too.

Most of all though, back in 1990, those Irish fans partied their way across Italy, certainly winning the tournament in terms of alcohol consumption, high spirits and famously good nature: ‘ole, ole, ole, ole’ almost achieved the status of a second national anthem. Ireland watched transfixed, proud and able to celebrate a nationalism that was, a last, shorn of its uglier political overtones. All across England Irishmen, those with Irish family, those who had Irish connections, those who had been on holiday to Co Cork three years ago or those who once knew someone named Seamus cheered Jack and the lads on.

Sport in Ireland had changed, and Ireland was changing with it. In recent times, the Irish Rugby team has flown the flag in the same way. When Lansdowne Road was being rebuilt, the GAA (having lifted its ban on those who had played ‘foreign’ sports) opened the door of Croke Park to soccer and Rugby: the atmosphere the day that Ireland beat England 43-13 at Rugby there in 2007 was one of unbelievable pride and passion.

Last week the Scottish football team were in town, amusingly enough chanting to the Irish fans that ‘we hate the English more than you do.’ They’re certainly right about that.

The reason for that is simple: any hatred there might have been, beyond the shores of a few Republican nutters, has gone. Recently, Prince Charles visited Ireland to the warmest of receptions. Before that, the Queen came, in a visit of enormous symbolic importance. Initially, nervous of popular reaction, the crowds were kept well back. By the time she was at Cork’s English Market, the warmth between her and the crowds she moved through was palpable.

Saint Jack was awarded honorary Irish Citizenship in 1996. He is also a Freeman of the City of Dublin, hold an honorary doctorate from the University of Limerick and there is a life size statue of him in Cork airport (fittingly enough in fishing gear and holding a salmon). Just two weeks ago, Charlton was at the Ireland-England game in Dublin. As the crowd chanted ‘ole, ole’ Charlton grinned broadly, and there was a tear in the old man’s eye.

The history of the English and Irish has about that as much as it has been about anything else.

1 thought on “A History of Ireland in Ten Englishmen (10): Jack Charlton & the New Ireland”