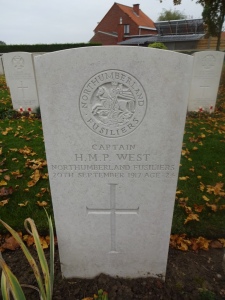 I have been leading tours to the battlefields of the First World War for many years, thus visiting some sights more times than I can count with any ease. The odd thing is how those same sights can seem somehow fresh, new in their meaning somehow.

In many ways it is easy for that to happen at Tyne Cot. In part that is a function of scale, of the 11,000 graves, what can almost seem like the unending lines of the dead. For that reason, in part, it is almost natural to depersonalise them. They are the dead; in Charles Sorley’s immortal words, ‘It is easy to be dead.’ it is all too easy for us to see them as just that, just the dead.

They were, of course, the living once. The way in which the Imperial War Graves Commission set out the cemeteries gives us a balance. In many ways,they do not distinguish: the rows of white stone, the same for all regardless of rank, or distinction.

Yet they do. Militarily, by rank, or by regiment. Or, by name. But then, there are those with no name.

One Old Novo killed in.the Great War was a young man of 24, Henry Meldrum Pelham West. He had first come to the Western Front in 1915, had fought on the Somme and then was killed on the Ypres salient, September 20th, 1917. He was wound twice that day, until being killed taking his objective.

His grave is in Tyne Cot. I have been there before, but today saw things I had not noticed before. West was a captain in the Northumberland Fusiliers. In the row in front of him was an unknown soldier.

How can an unknown soldier be rembered as a person? In the most real sense, they cannot. Perhaps, in one sense, the author of those words, ‘A soldier of the Great War, known unto God’, makes every unknown soldier personal: his son, Jack, was one. In this case, the grave tells us he was a Northumberland Fusilier, just close to an officer. Behind both, from another regiment, was a major. Close by, was another officer. The inscription, paid for by his family, spoke of his sorrowing womenfolk, and then a simply of ‘duty well done’.

Over them all loomed a tree, in its autumn beauty, and beneath it lay the fallen, yellow leaves of Autumn. The symbolism, the fallen, moved me at the very same rime as I thought of the officers, the men.  Fallen like leaves, the white stone. Yet each one, whether it was Captain West, or the soldier known so well unto God.

Each leaf is, was, unique. So was each man.