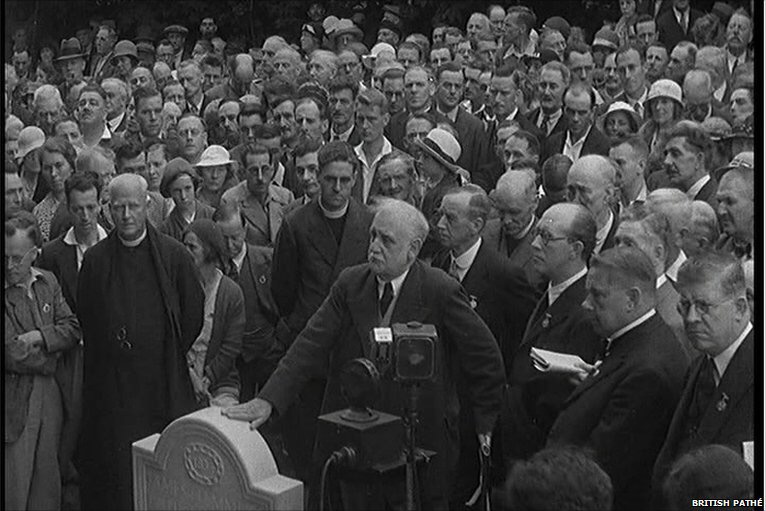 If any era should have provided a fertile breeding ground for radical socialism, it should have been the ‘thirties. Unemployment peaked at just shy of three million in 1933 (it was certainly higher in reality, as that was the figure for insured workers only); in Outer Britain’s depressed areas there were whole communities, famously Jarrow after Palmer’s went broke in 1935, in which the majority of the workforce were unemployed. Poverty was real, as was the humiliation of the means test, with all its echoes of the old Poor Law. And then a government led by a former Labour leader, Ramsay MacDonald, cut unemployment benefit. For socialists it was all too easy to imagine the imminent collapse of capitalism. Socialism’s hour had come: and not the failed reformism of Ramsay MacDonald, but full-blooded socialism.

Moving left was Labour’s first instinct, after MacDonald’s National Government won their landslide in 1931, leaving a rump of just 52 Labour MPs in the commons. Among the wreckage, the veteran left-winger George Lansbury emerged as leader of the parliamentary party, then the party itself. I have written about Lansbury elsewhere, but his story is illustrative of the limited traction even the Labour left could command in the ‘thirties. Lansbury’s socialism was from the romantic radical tradition, the same tradition later co-opted by the likes of Michael Foot, Tony Benn and even Jeremy Corbyn. Lansbury, famously described by AJP Taylor as the natural leader of the ‘emotional left’, seemed even then like a figure from another time. This great clip, sees him lionising the great heroes of the trade union movement wand the emotional left of the 19th century, the Tolpuddle Martyrs.

What really aroused Lansbury’s passions, like many on the left of the party, was foreign policy. After losing his seat, MacDonald’s natural successor, Newcastle’s own Arthur Henderson, dedicated himself to peace activism and the League of Nations. Lansbury went further, being an out and out pacifist. As such, Lansbury was popular with much of the party, especially its constituency members and Labour won by-elections and, in 1934, control of London County Council.

It was Lansbury’s pacifism that destroyed him. In truth, his inadequacies as party leader were all too evident, perhaps even to the man himself who looked increasingly old, tired and even somewhat lost. At the 1935 Brighton conference Hugh Dalton introduced a motion in support of sanctions, backed by the potential use of force, against an Italian invasion of Abyssinia should it happen. Lansbury responded with a passionate speech:

The delegates on the floor gave him a standing ovation and sung ‘for he’s a jolly good fellow’.

Well, most of them did. After the disaster of 1931, real power in the Labour movement was not concentrated in its parliamentary rump. Some very different types of socialists dominated its National Executive Committee now. Dalton was one of them. Likewise, the overwhelming vote in its party conference was held by the trade union bloc vote. Of those unions, none was more powerful, more important and more ruthless than Ernie Bevin.

When Bevin rose to his feet, he did not spare Lansbury:

It is placing the Executive and the Movement in an absolutely wrong position to be hawking your conscience around from body to body asking to be told what to do with it.

Bevin’s speech was heard with loud catcalls and even hatred in the hall; the union bloc vote delivered Bevin a win by 2,168,000 to 102,000. Dalton recorded in his diary that Bevin had ‘hammered Lansbury to death.’ When accused of being somewhat rough on the old man, Bevin’s reply was brutal, if accurate:

Lansbury has been going about dressed up in saint’s clothes for years waiting for martyrdom. I set fire to the faggots.

Lansbury gave up the political ghost eight days later. Under the unlikely leadership of Clement Attlee, Labour would go on to abandon Lansbury’s pacifism, oppose appeasement and embrace rearmament, thus making it a natural partner in Churchill’s national government. The de facto leader of the left was now Sir Stafford Cripps.

If Bevin was brutal towards Lansbury at Brighton, he hardly spared Cripps either. Cripps was a wealthy lawyer. For Bevin, whose socialism was centered around ‘our people’, the sight of a wealthy London lawyer railing against the evils of capitalism and imperialism whilst Fascism and Nazism took away the rights of trade unions and threatened their British comrades was a sight too far:

People have been on this platform today talking about the destruction of capitalism. Lawyers and members of the professions have not done too badly… the thing that is being wiped out is the trade union movement. It is we who are being wiped out and who will be wiped out if fascism comes here.

That lay at the heart of Bevin’s socialism, and his opposition the party’s left: whether romantic, like Lansbury, or Marxist like the Cripps of the ‘thirties. Cripps had only joined the Labour party in 1929. However, by the time he had become chairman of the newly founded Socialist League in 1933, he had moved sharply to the left. For example, he argued that a future socialist government would probably need to prolong its own lifespan without a general election. At Brighton, he described the League of Nations as an ‘International Burglars Union’. Later, he was expelled from the Labour party in 1939 as a punishment for his earlier advocacy of a popular front in which the party would cooperate with the Communists and the ILP, which had disaffiliated from Labour in 1932.

In short, Labour’s far left had its moment in the sun under George Lansbury. It was short-lived. In truth, the wider Labour movement and, most of all, its voters, were always closer to the moderate socialism of Bevin and Attlee than the romantic socialism of its veteran leader, or the Marxism of Cripps. Under Attlee, Labour began the long road to 1945 in terms of economic and social policy, and in its decisive turn against appeasement and for rearmament. Labour’s far left was on the margins once more.

1 thought on “The Left in the 1930s: Labour, Lansbury, Cripps and Failure”