Serjeant David Blakey is one of the 1,288 soldiers buried in Connaught cemetery, just down the road from the great Thiepval Memorial to the missing on the Somme. He was one of the 19,240 British soldiers who lost their lives on the fateful 1st July 1916. The first cemetery there was begun in the early autumn of 1916, by 1918 it contained 228 graves. In the immediate aftermath of he war, bodies were brought there from a number of smaller cemeteries nearby. Serjeant Blakey’s remains were not found, and his name was inscribed a little up the road on the Thiepval memorial, for the fallen with no known grave.

In most ways we might describe David Blakey as a pretty ordinary man. However, like so many an ordinary man, his life and death can tell us a great deal about the Britain, and in this case the northeast that went to war in 1914. He was born at Crow Hall Cottages, Sunderland Road, Felling, Gateshead, in November 1889. Felling meant coal: his father was a coal miner. Blakey was one of at least 10 children from his father’s two marriages; again, to have more than one marriage in a lifetime was not so unusual, but it was usually a result of the death of one spouse, what we call serial monogamy. He was educated at Low Fell Board School, before going on to Gateshead Higher Grade School. This was more unusual: the school leaving age was 12, and most children never attended a secondary school. 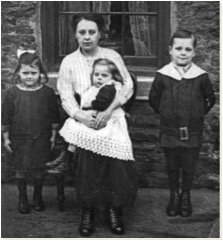 However, the years before the war saw the coming of a far more literate working class, whether through schools, non-conformist churches, trade unions or the likes of the Workers’ Educational Association. This was not much reflected in their jobs though. When Blakey moved to Winlaton with his family in 1907, he worked as a miner as his father had done before, now at the Stargate Colliery. In October 1908, he married Sarah ‘Sally’ Kendall at St Paul’s Church in Winlaton, the couple would go on to have three children.

A keen sportsman, David played rugby for Winlaton Vulcans (below), he was capped eight times for Durham County, and in the months before the war he had signed as a professional for Leeds Rugby League FC. 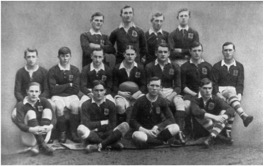 War put a stop to that. The Royal Inniskilling Fusiliers were an Ulster regiment. However, the south of the Tyne of 1914 had very strong connections with Ireland: the areas biggest coal owner was the Marquis of Londonderry, there were also many thousands of Irish people living there (some originally brought over by Londonderry as blackleg labour to break a miner’s strike). So it was that the Royal Iniskilling Fusiliers mounted a recruitment drive in Gateshead; it is believed the Englishman joined an Irish regiment because is wife Sally was from Londonderry.

He was obviously a good soldier. Joining the 11th Battalion, David travelled to Finner, Co Donegal in September 1914 for training, before moving on to Sussex in July 1915. He was promoted to lance corporal on March 1st 1915, then quickly on to full corporal. It is not known when he was promoted to sergeant. But it was on October 5 1915,that Serjeant Blakey was deployed to France. He had his first taste of the trenches at Abbeville in France, before his 36th Ulster division found themselves preparing for the big push.

Thus it was that on that fateful July day the 11th Battalion, left their trenches in Thiepval Wood to attack the Schwaben Redoubt, in the vicinity of where Connaught Cemetery is now. The Division achieved its objectives during the Battle of the Somme, the only one so to do on the northern sector of the front, and reached the third German trench line (the map is from Martin Middlebrook’s The First Day on the Somme).

This was at great cost, but the attacks on either side failed, with the result that the Division was left exposed to fierce German counter attacks from three sides, and without the success being reinforced, the shattered remnant had to retreat back to their trenches.

At the end of the July 1 of the day, of the 4,000 Inniskillings some 2,208 men were casualties. No other regiment suffered a higher casualty on a single day in any other battle

It was the course of that offensive that Serjeant Blakey was last seen alive in no man’s land, then reported missing, presumed dead: his body was never found. In doing so, he earned the military medal for bravery. The following year, the medal was pinned upon the breast of his seven-year-old son at a ceremony in Winlanton. Bombardier Henry Blakey was killed at Dunkirk in the next war.

Serjeant David Harkness Blakey’s remains were discovered during road works that were being carried out on the D73, close to the Ulster Tower, in November 2013 by the Somme Departmental Council to accommodate the extra traffic in view of the centenary commemorations, just outside the bounds of Connaught cemetery. He was finally laid to rest, with two unidentified comrades, on October 8th 2015.

Last week, we remembered him, and his comrades, at Connaught Cemetery. On the 11th, we will remember him, Serjeant David Harkness Blakey (below, back row, centre) again. An ordinary, and an extraordinary man.