That’s the thing about Berlin. It disorientates us now, its history is disorientated, and as a city it’s all over the place.

One of our guides remarked that the Hohenzollern Berlin centred upon Unter den Linden is all about sight lines. You were meant to see things in relation to each other. But now, we see things not as they were meant to be, but how Berlin’s convulsive history has left it.

The theme of our walk this afternoon was meant to be the Berlin of Frederick the Great and the kaisers. And so it was. And wasn’t.

You see the problem is all Berlin’s other histories keep sticking inconvenient oars in. So, towards the end of our tour we were stood by the Brandenburg Gate, at the corner of what I keep calling the Holocaust Memorial, but am meant to call the Memorial to the Murdered Jews of Europe.

There’s two histories to start with. The Brandenburg Gate was a statement of Prussian hubris: of the greatness of Prauusian military might, and Prussian militarism. It is often supposed that there was a historical direct line from the Prussia symbolised there and the horrors of Nazism, the supposed special path taken by Germany known as the Sonderweg. The origins of the Second World War and the Holocaust are found in    Bisrmarck’s ‘blood and iron’.

Too easy, too off pat. If we start with Frederick the Great. He turned out to be a great military leader, but despite himself. His father, the Soldier King, certainly wanted him to be, but Frederick was more interested in the Enlightenment and the flute (and possibly young men). The Frederick the Great the Nazis liked to laud wasn’t like that.

The military Berlin was there, for certain. Lustgarten had been a made a parade ground by Frederick’s father. The Nazis did the same.

But around it is a very different Hohenzollern Berlin. Humboldt University, the treasures of Museum Island or just about anything built by Schinkel tell us something very different.

And if we head back to where we started, looking around the Brandenberg Gate, we get another Prussian military history. For much of that history, Prussia was as much invaded as invading. In 1806, an emperor paraded in triumph through that gate: he was Napoleon. He took the Quadriga above it back to Paris.

If we are looking for statements imperial hubris, we might do well to look to the history of Imperial Berlin, after it became the capital of the new Germany. Look along into the Tiergaten along Siegesalle from the Brandenburg Gate, and you see the Column of Victory. Originally meant to commemorate Prussia’s victories ov Denamrk and then Austria in 1864 and 1866, it ended up commemorating the victory over France and the creation of the German Empire.

But, to start with, that German Empire was anything but the marauding machine of blood and iron of legend. The Germany of Bismarck was as much cautious and (in every sense) conservative as anything else.

But then came Kaiser Bill. At one end of Unter den Linden, be built the monumentally ugly Berliner Dom. At the other end, as it became Siegesallee, he had 32 statues built of his ancestors, what became nicknamed Doll’s Alley. Now we get the real hubris. In his Stadtschloss, back near the Berliner Dom, he had knocked down some great Schinkel to built the great public space where he would declare the burgfrieden in 1916 (the unity of all Germans in war). Over the road is the Neue Wache, and Kollwitz’s great work of art mourning the boys who fell.

When they came to power, the Nazis in truth saw the Kaiser and his works as an embrassment. They moved and made the Column of Victory bigger. They moved Kaiser Bill’s statues. Then, they made war. When the Germans took Paris in 1940, they marched through the Arc de Triomphe, and Napoleon could spin in his grave.

The Memorial to the Murdered Jews in some ways speaks for itself. I will confess that before now it has left me pretty cold. I did see more today.

On its far corner it’s what one of our guides described as some flats and a muddy car park replete with dogshit. Beneath it was Hitler’s bunker. The end of the Third Reich.

Just up from the Brandenburg Gate is the Soviet War Memorial, the first building built in the ruins of the Berlin of 1945. The war was there in the very walls. 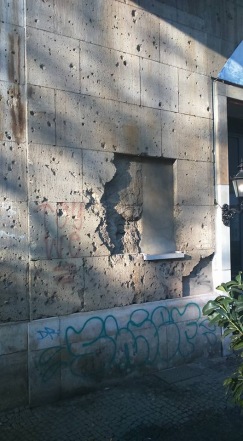 The gate itself would turn out to be on the front line of the Cold War. Back to sight lines. At the other end of Unter den Linden, once it has become Karl Liebknecht Strasse, is the old East Berlin Television Tower. We have the divided Berlin too.

Just south of the Memorial to the Murdered Jews is Potsdamer Platz. There was another Germany,the Weimar Germany of Marelene Dietrich; down the road the Hansa Studios of David Bowie. Head north, and turn a corner, was the Jewsish Berlin of the most emancipated Jews in Europe.

And in that sight line is the modern Reichstag, the symbol of democracy and freedom. By the Brandenburg Gated the revolutionaries of 1848 and 1918 proclaimed freedom.

And back in Frederick the Great’s Berlin is the university of Marx and Engels, Einstein, Humboldt himself. Hopefully, we all endorse the Importance of scholarship, the primacy of fact and the ideal of open intellectual enquiry. Outside the university library is the Empty Libaray: where Nazi students burned books in 1933.

Hitker’s bunker runs up to Hannah Arendt Strasse. Hannah Arendt: she who wrote about Adolf Eichmann and the Holocaust, and the terrible consequences of the denial of truth in politics and culture.

And how much does that matter now?

Have I made any sense of Berlin, and it’s confusion? And why this really matters….