Conservative, in the National Government, under Baldwin

Samuel Hoare was the son on a Conservative MP, went to Harrow and then went to New College, Oxford in which he achieved firsts in classics and history. He was also a blue in rackets, and a member of the Bullingdon club; he went on to be a very good skater, shot and tennis player. He was also religious, having a deeply held Anglicanism of the Anglo-Catholic variety.

His family groomed him for politics from the start, and he reciprocated by being no less ambitious. He entered parliament in 1910. In the war, he was in intelligence in both Russia and Italy. In 1918, he supported Lloyd George; by 1922, he had changed his mind and played a prominent role in the manoeuvring that led to the Carlton club and the fall of Lloyd George and Austen Chamberlain. Bonar Law rewarded him with the post of secretary of state for air, outside the cabinet; when Baldwin succeeded Bonar Law the following year, he entered the cabinet. He held the same position in Baldwin’s 1924-29 government, with some success and a great deal of enthusiasm for air transport; he also helped secure the independence of the RAF.

In opposition, Hoare proved his worth to Baldwin. He was party treasurer, served in the India round table talks of 1930-31, mediated between Baldwin and his enemies (the newspaper proprietors Beaverbrook and Rothermere) and played a key role in the creation of the National Government. Given the political minefield it was, his promotion to the India Office surely showed the esteem in which both MacDonald and Baldwin held him. The Government of India Act, 1935, was both immensely complex and politically controversial in his own party: Hoare’s relationship with Churchill never recovered. By the time Baldwin succeeded MacDonald as prime minister in 1935, the process of getting the bill through the House had left Hoare exhausted and unwell.

Nonetheless, when offered the Foreign Office, he took it. To say he arrived at a difficult time is something of an understatement. The Abyssinia crisis was brewing, just as the League of Nation’s Union Peace Ballot was being formulated. With an election due in the next year or so, the belief that public opinion was strongly anti-war and for the League was to inform policy, with unhappy consequences. 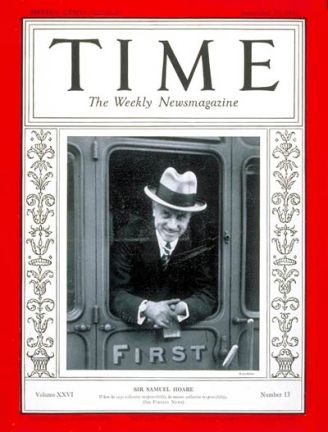 The cabinet had decided that, were Italy to invade Abyssinia, Britain would feel compelled to stand by the League. He gave the speech of his life in Geneva on September 11th: Britain would stand behind ‘the League Covenant in its entirety’. Unfortunately, as so often in these years, Hoare had spoken without consulting the French. When he spoke to his French counterpart, Pierre Laval, he learned that the French were by no means inclined to use force against Italy. The Italians invaded Abyssinia on October 3rd; eight days later the League’s Assembly formally declared Italy an aggressor state. There was a very real possibility of sanctions, which would have to be imposed by the British navy: that could mean war. The threat of sanctions, and war, did produce some movement. Under pressure from the Vatican, Mussolini outlined a possible compromise on October 17th. Two days later, Baldwin called a general election.

The sanctions didn’t work, thanks to American oil. Meanwhile, though, behind the scenes diplomacy had worked out the basis of a deal: Ethiopia would cede territory, abolish its army and allow Italy economic primacy. Under the cover of travelling to Switzerland for some skating and a rest cure, Hoare met Laval in Paris and the Hoare-Laval Pact was born. Two days later, the plan was leaked to the press.

It was quickly a dead letter. Mussolini publicly rejected it, to save face. It was greeted with a wave of sanctimonious outrage at home. Hoare was forced to resign: ‘no more coals to Newcastle, no more Hoares to Paris’, went the joke. To add injury to insult, when skating he had blacked out and fallen flat on his face, breaking his nose.

Hoare would be back in 1936 as first lord of the admiralty, then the Home Office a year later; thus, he was one of eight men since 1900 to be both foreign secretary and home secretary. By the time he was back in the cabinet, the Italians had conquered Ethiopia. To make matters worse, the Stresa Front was broken and Mussolini fell into Hitler’s suddenly welcoming arms. Furthermore, the League of Nations was wholly discredited and Hitler’s army was in the Rhineland. There might have been greater failures in the Foreign Office, but we probably have to go back to the days of Lord North to find one.