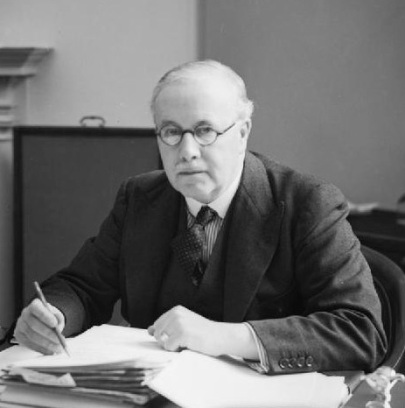 Wood, the son of a Wesleyan Methodist minister, was educated in a Methodist school and he remained an active Wesleyan all his life. He entered the Commons in the Coupon Election, having already made a mark on London County Council, and by proposing that the government create a ministry of health (an idea taken up by Lloyd George). Wood was a coalitionist, who served three Ministers of Health: Addison and Mond (both Liberals) in the coalition, then Neville Chamberlain from 1924-29; he didn’t serve under Bonar Law. He was the government’s man in charge of Newcastle and the Northeast in the General Strike. In the National Government he was postmaster general, minister of health and minister of air in the pivotal year of 1938. He played a key backstairs role in the 1935 general election. He was very much a Chamberlainite, and his standing in the party was reflected in his election as the grand master of the Tory grassroots organisation, the Primrose League, in 1938. He is also believed to have advised Chamberlain to call a snap election in the aftermath of Munich.

As minister of health created a midwifery service and energetically pursued the slum clearance, matters close to Chamberlain’s heart. When a shortage of skilled building workers threatened the building of factories to greatly extend the air force, Wood offered to slow the house-building programme down. Soon after, he was made secretary of state for air. At the air ministry, Wood made a key contribution to British history. The cabinet had already initiated Scheme L, a lavishly funded plan to build as many aircraft as possible, and as quickly as possible. Wood extended that to Scheme M, which saw aircraft production increase threefold over the next two years; just as importantly, Wood switched the emphasis of the building programme towards fighters. In many ways, he was the father of the Spitfires and Hurricanes that played such a key role in 1940.

Wood played a key role in 1940. By then, he was lord privy seal. As a trusted friend of Chamberlain, and a key figure in the Conservative Party, he told his boss that his position was untenable in the aftermath of the Norway debate. He also advised Churchill not to give way to Halifax. As a prominent Chamberlainite, Wood was a very political appointment on Churchill’s part, at a time when Churchill was very unpopular with many of Chamberlain’s supporters. He is often seen as one of the less influential chancellors, in part thanks to the emphasis given by the government upon the allocation of physical resources above all else. Wartime economic policy was led by the likes of Chamberlain, Sir John Anderson, Attlee and Bevin. Initially, he was not in the war cabinet; again, he was excluded from it in 1942. His primary role was financing the war: as such he raised taxes. He left a lasting legacy, however: the shift in emphasis to direct taxation, and the increase in the top rates of income tax would endure long after the war. He also he laid the groundwork for the adoption of Keynesian economics. He also instituted the direct collection of income tax from earnings and created PAYE. Politically, his sure touch deserted him and caused political problems for the Conservatives, when he responded cautiously to the Beveridge Report, creating the impression that they were less than fully committed.

Wood holds the unhappy distinction of being one of two chancellors to die, suddenly, in office. If he was more marginal than many chancellors, that was a consequence of war. In 1938, and again in 1940, he played a key role; as chancellor, he left his mark on a department so often resistant to change or creativity.

Thanks to Hugh Gault for additional information.