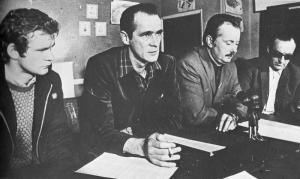 John Stephenson was born in 1928 in Leyton, Essex (de facto in London’s East End), the son of solicitor’s clerk and a mother who claimed to have been born in Belfast but was, in fact, born in Bethnal Green, the daughter of an East End boot maker. There may have been earlier Irish ancestors, but a couple of generations before. Stephenson’s mother may have invented her Irishness, but it seems to have stuck with the boy, especially after she died when he was just ten.

MacStiofain would go on to become the Provisional IRA’s Chief of Staff, pictured second right in the 1972 press conference seen below with Martin McGuiness, Daithi O Conaill and Seamus Twomey, MacStiofain’s successor. Having served in the RAF after the war, Stephenson began to gravitate towards Irish Republicanism. By 1953, he staged a raid on the armoury of Felsted School, along with a leading Dublin Republican Cathal Goulding. The raid was botched, and Stephenson and Goulding were sentenced to five years. By the time he emerged from prison, he had learned Irish, after a fashion, and developed an enthusiasm for the Cypriot terrorist movement EKOA, and had changed his name to a Gaelicised form, something of a tradition in Irish Republicans.

By the ‘sixties, the Republican movement was in transition. The ill-starred Border War of 1956-62 had patently failed and, being in prison, Goulding and MacStiofain escaped the bitter fall out from that failure. Goulding emerged as leader and, under him, the IRA was transforming itself into a socialist, constitutional movement. That was bitterly opposed by elements of the Republican movement, including MacStiofain and his Dublin based allies Daithi O’Conaill (Dave O’Connell as everyone knew him) and Ruairi O’Bradaigh, who were mass going Catholics and who clung to a more traditional sectarian Republicanism and found revolutionary socialism uncongenial.

The clash opened out as the Civil Rights protests in Northern Ireland began to lead to violence from local security forces and consequent retaliation: by August 1969, the violence in Belfast had become so bad that some looked to the use of arms. MacStiofan and Goulding clashed, over that issue to begin with. Not long after August 1969, Roy Johnston was made an advisor to the Army Council. Johnston was a former member of the Communist Party and its Irish subset, the Connolly Association. For a conservative Catholic convert like MacStiofain, this was anathema. MacStiofain accused Goulding and the leadership of ‘extreme socialism’. MacStiofain refused to transport condoms, used in bomb-making at the time, from the north into the Republic. When Johnston wrote in the United Irishman that the practice of reciting the rosary at republican commemorations was sectarian, MacStiofain, living in Kerry at the time, blocked the organ’s distribution. As a result, Goulding had MacStiofain dismissed from the Army Council and suspended from the IRA itself.

Those who, like MacStiofain, would break from the IRA also resented its move away from violence into politics: they wanted a return to force: ‘we are army men’ became the refrain. Whilst the majority of the leadership of the early Provisionals were southerners, their realisation that the future of armed republicanism was in the north was right. It was, in the end, it was northerners like Gerry Adams and colleagues in the Lower Falls Road that moved onto the attack. On March 8th 1971, three young Royal Highland Fusiliers were lured from a bar and killed; a few days before both the Officials and the Provisionals held hostages from each side, and Charlie Hughes, a supporter of the Provisionals, had been killed. In the months that followed, the Provos won out. They had also begun the killing in earnest. Here is MacStiofain on the killing of a British soldier:

By 1972, the bloody conflict in Northern Ireland led to brief and ill-starred truce. MacStiofain was part of a delegation which he claimed were all IRA men, with none from the ill regarded SinnFein. Gerry Adams was important enough to have his release from internment be part of MacStiofain’s preconditions for those talks. Adams and Martin McGuiness are part of a northern dominated delegation. Here he is, in a press conference from that time (spot the young Martin McGuiness).

Two days after meeting Whitelaw, fearing that a long truce would weaken the Provisionals in the north, the Provsional’s violence resumed at a new level of horrific intensity: just twelve days later, Bloody Friday would see twenty car bombs kill nine, and injure 130 people. By then, MacStiofain was all but irrelevant. In 1973, he was arrested by the Dublin government after an incendiary TV interview, and sentenced to six months imprisonment for IRA membership. MacStiofain went on hunger strike, but ended it after 57 days: many Republicans believe he actually did take food in that time. As a Republican, he was finished from that moment.

In truth, many had never trusted him. He seems a strange figure now, with his badly strangulated London pronunciation, but his legacy was one of grim violence. One Englishman who made Ireland a far worse place for sure.