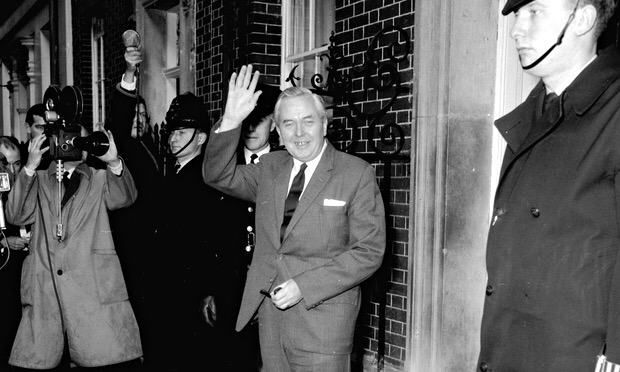 Labour won the 1964 general election in October with a razor-thin majority of just four seats, after 13 consecutive years of Conservative government. Labour’s tiny minority could collapse at any time: they won with a majority of one when a vote on the amendment to the Finance Bill was tabled by the opposition. Labour were desperate to hold on to a majority in votes. They resorted to many desperate measures; to guarantee that ill MPs would attend, beds were installed in the lobby, and some were even carried in on stretchers. Then, eight MPs had asked to retire due to old age but they were denied; vote by proxy had also been proposed.
Perhaps the main reason the Labour government managed to last was due to having the same foreign and domestic policies as the Conservatives. The press called Wilson ‘Hilson’ and the Conservative leader Heath ‘Weath’. In December, Wilson reshuffled his cabinet in order to shut down the mounting criticisms over the government’s handling of home affairs. Labour also tried to enter a de facto alliance with the Liberals in order to prevent them siding with the Conservatives.

The economy was in great difficulty and this was evident from the sterling crisis. England was labelled as the ‘sick man of Europe’ due to its sluggish growth especially when the total value of Britain’s national output, was down from one fifth to one seventh of the US and had already been outdone by West Germany. Furthermore, the large deficit in the balance of payments was also problematic. The excessive spending on defence and limited industrial investment was to account for this. The military budget had risen from 1.7m 1961 to 2.1m in 1965, 15% of Britain’s national output was spent on defence, even though the government had announced that the figure was only at 7%. The deficit had mounted to £765 million compared to £450 in the previous year.

Despite of just managing a majority in 1964 and performing poorly in local elections, Harold Wilson called an election on 31st March 1966. Labour had returned with a much larger majority of 96 seats. This was perhaps due to the fact that the Conservatives had a new leader (Heath) and he did not have enough time to win the support of the public. He was seen as cold by the voters compared to the ‘pipe-smoking’ family man epitomised by Harold Wilson.

Due to the economic difficulties Harold Wilson had believed in the end of the balance of payments and high inflation wages and thus had advocated cuts in wage freezes. The devaluation of 1967 made Labour appear weak because there had been a rise in union action after further financial struggles; in the first half of 1965 1,365 strikes took place, the highest number since 1960. As many as 566,000 workers were involved which had caused a loss of around 2 million working days. Wilson had blamed the unions for the balance of payments deficit; Chancellor Callaghan had resigned because the deficit had been hugely overestimated especially in the private sector.

Wilson was also humiliated after the President of the EEC; DeGaulle vetoed Britain’s application to join after all the MPs had backed the bid. The Labour administration of 1964 was blamed for the growing rise of unemployment, inflation, wage controls and attempted restriction on union freedom.