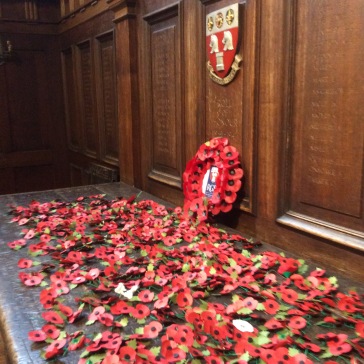 Every year we hold our two remembrance assemblies in our main school hall, before the school’s war memorial: a memorial organ donated by Sir Arthur Sutherland in 1923. This year we began with a reading of Rupert Brooke’s The Soldier and followed with the choir singing I Vow to Thee, My Country. Here were the thoughts I shared then, about those pieces, our country, the RGS and the Great War.

Gustav Holst was a grammar school boy: Cheltenham Grammar. The music was written in 1918, though it did not become a choral piece and hymn until the 1920s. It was probably first performed in a remembrance ceremony in 1922, the year in which this war memorial was constructed; in ceremonies thereafter, especially when it was published as a hymn in Songs of Praise in 1928, it became a staple of remembrance assemblies. In truth, Holst regretted allowing it to be associated with Cecil Spring-Rice’s poem, The Two Fatherlands, but there was nothing he could do about it: I Vow to Thee, My Country had taken on a life of its own.

Rupert Brooke was a public schoolboy, going to Rugby school. By 1914, he was already an established poet, living in Grantchester, just outside Cambridge. If you know Grantchester, it is a quintessential English village: think a sleepy river rolling through the Cambridgeshire lowlands, the trees, open meadows, timber frames and country pubs. Another of his most famous poems was The Old Vicarage, Grantchester, a hymn to the English village sung sweet:

Brooke’s The Soldier is often contrasted with Dulce et Decorum Est, Wilfred Owen’s great poem of the pity of war. Brooke is taken as the personification of what Owen called ‘the old lie’: dulce et decorum est pro patria mori. It is certain, though, than none of the men of the Great War commemorated on our war memorial would have heard of Owen, let alone read him; Owen was writing as an unknown, and was to remain largely unread for many years to come. There’s a good chance many would have read Rupert Brooke. Like The Two Fatherlands, Brooke’s verse is often associated with one simple word: patriotism. The patriotism we think of when we think of 1914.

What happened in 1914 was, indeed, remarkable. As all over Britain the famous pals’ battalions were raised, the volunteers of Kitchener’s New Army came forward on Tyneside too: whether they enlisted into existing territorials like the 6th Northumberland Fusiliers, or the Tyneside Irish and the Tyneside Scottish, or the Newcastle Commercials. Along with others of the city fathers, the headmaster of the RGS, John Talbot, played a key role in the raising of the Newcastle Commercials, the 16th Northumberland Fusiliers, and in their early history. He was gazetted as Major, and went with them to Alnwick for the first few weeks of their training.

Whatever it was persuaded those men to enlist was probably as varied as the men themselves. But there was one notion that the vast majority of them would have recognised: duty. And of them most would surely have felt at ease with the idea of their duty to king, and country. For some, such a simple patriotism sits uneasy. Even if that is the case, we must still surely recognise the draw and emotional power of that shared identity and, even beyond that, a shared, commonly bonded nationhood: in Brooke’s words, ‘the thoughts by England given’.

In 1921, John Talbot proudly announced to the school that 1,114 Old Novos had served in the war: that figure was almost certainly an understatement. They were just a few of the 8.7m men from Britain and her empire who saw service in the First World War. Britain had never fought a war on this scale before, and the losses were terrible. The truth, often unrealised, is that the overwhelming majority came home. Depending on how it is calculated, something around 11% of British servicemen met their deaths in the First World War: 89 out of every 100 came home, the overwhelming majority to live full and active lives.

Most of the Old Novos who came home had what we might think of as normal if unspectacular lives. They had jobs: as schoolmasters, as solicitors, in business or medicine. They had their hobbies and passions: there were presidents of Rugby or Golf Clubs, they were churchwardens, debaters, local councillors. Some achieved prominence. Alastair Smallwood was a boarding school master and then housemaster at Uppingham School; more pertinently, he was also captain of Leicester RFC and capped fourteen times for England, scoring 7 times in 14 Five Nations matches over 5 seasons. Ronald Hall became bishop of Hong Kong, and the first Anglican bishop to ordain a woman, and a founder of Hong Kong’s Cantonese university. There were academics, senior civil servants, leading surgeons. There was even a star of stage and screen, and an impresario, the wonderfully named Tod Slaughter.

Some of them were distinguished soldiers too: in 1921, Talbot with no less pride announced that 100 Old Novos won military decorations or were, as it says, mentioned in despatches. Ronald Hall was the youngest brigade major in the British army, MC and bar. Ralph Pritchard was mentioned in despatches, won a Distinguished Service Order. He was also awarded the Military Cross. 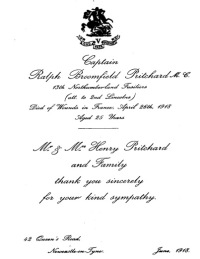 Ralph Pritchard was not as lucky as Ronald Hall. He was killed on 26th April 1918, dying of wounds sustained ten days earlier on the same day as his brother William was killed. Ralph had enlisted as a private soldier in the Newcastle Commercials, before being gazetted a captain of the 4th Tyneside Irish.

The Tyneside Irish and he Tyneside Scottish attacked at La Boiselle on the first day of the Somme. The losses sustained that day by the Tyneside Irish are, in truth, hard to calculate accurately: the best (minimum) estimate might be 596 killed, 1575 killed. Ralph Pritchard was one of those who fought, according to the school roll of honour winning his military cross on that day; his brother William was one of those wounded later on in the same battle. Ralph’s brother officer in the 1st battalion Tyneside Irish, Capt Arthur Thompson, was not so fortunate. In the end, all three men men are commemorated on the school memorial.

Three weeks ago we stood at the grave of Arthur Thompson (left, seated third from left, with his brother officers from the 24th Northumberland Fusiliers). Like Ralph Pritchard and so many Old Novos, he had enlisted in the Newcastle Commercials. Both Pritchards were typical of the grammar school boys who enlisted as private soldiers the grammar school boys but soon, a s the supply of the public school bopys like Rupert Brooke ran thin, were made into officers. Some stayed as private soldiers: some of both kinds were killed; most, like Ralph and William’s brother Henry, got through the whole thing.

On the school memorial are named 158 Old Novos who fought and died in the Great War: the men who did not make it. We began with Rupert Brooke and the archetypal English village. When we stood at Arthur Thompson’s grave, we looked across the gently rolling fields of La Boiselle, across the Somme battlefield, across the fields upon which he had walked, in full kit, into German machine gun fire and artillery. We may no longer feel it is sweet to die for your country. But we may surely admit these men on their own terms: those who were killed, and the hundreds who came home. Like all the Commonwealth War Cemeteries, Ovilliers Cemetery has the look and feel of an English country garden. In Brooke’s famous words, it is a piece of a foreign field that is forever England.

The third verse of I Vow to Thee, My Country is not always sung. It speaks of ‘another country’; that country is heaven:

And her ways are ways of gentleness, and all her paths are peace.

One can but pray for the paths of peace. Or, in Rupert Brooke’s words, ‘the thoughts of England given’:

…and gentleness,
In hearts at peace, under an English heaven. 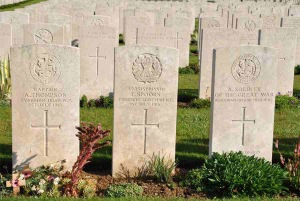 You can read more about visiting Arthur Thompson’s grave here

You can read about the story of the memorial organ here

And about the remarkable Tod Slaughter here