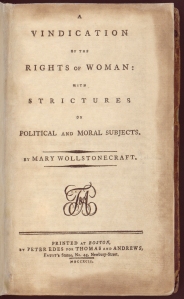 As one of the earliest feminists, Mary Wollstonecraft can be seen to have had an impact on feminism today. Her ideas, although discredited by her husband shortly after her death with the publication of the details ofher private life, have gone on to influence more modern feminists. Millicent Fawcett wrote the foreword for the centenary edition of The Vindication of the Rights of Woman, Lucretia Mott, an organiser of the Seneca Falls convention read her work and even Caitlin Moran refers to herself as ‘half- Wollstonecraft’. Modern feminists have to side with Caitlin Moran in this view, while her ideas were radical for the time, modern audiences cannot quite agree with the entirety of her message. However controversial Wollstonecraft’s ideas were, and still are, hers were some of the earliest feminist philosophies and have to have some influence on later writings.

Her early life can account for some of her message. Having a subservient mother to a domineering father tainted Wollstonecraft’s ideas of marriage. She then worked as a schoolmistress and a governess, inspiring her first work, almost a self-help book, Thoughts on the Education of Daughters. This advocated women’s education, suggesting they should be taught reasoning and analytical thinking. This, however, came with the caveat that this knowledge would be helpful ‘should women find themselves single’, indicating the still prevalent ideal that all women should marry.

‘The Vindication for the Rights of Man’ was published as a response to an earlier book on the subject of the French Revolution. Edmund Burke’s Reflection on the Revolution in France advocated the monarchy and denounced the revolution. Wollstonecraft attacked Burke’s ideas of male strength and women’s weakness. As a feminist she stood for equality, but in this early piece, restricted that specifically to 18th century men.

The Vindication of the Rights of Women was Wollstonecraft’s most popular publication, although it had its flaws. Again fighting for the education of women beyond domestic skill, Wollstonecraft once again argued the importance of analytical thought and logic. It contained a plan for a national scheme of education, including coeducational classes and the mixing of classes. This classless idea was countered in the idea that the working class children should only be educated beyond the age of 9 if they showed exceptional skill. Her main plan for education was to make women the equals of men as they should be companions in marriage. This is the idea which sets her apart from modern feminists; Wollstonecraft only posed a situation ending in marriage for women, not expanding on anything beyond that. Her scathing critique of ‘sensible’ women came from her negative view of the upper class ladies from her time as a governess. She saw upper class women as mere baubles, entirely reliant on emotion, rather than reasoned thinking.

Her fictional works are the most controversial for the time. Both of her books present women as trapped by marriage, one even contained a cross-class same sex romantic friendship.

Overall. it was her private life which ruined Wollstonecraft’s work. Her affair and child with Gilbert Imlay was revealed by her husband, William Godwin. This affair, alongside another with married painter Henry Fuseli, was seen as contradicting her work, advocating the upholding of virtue by both men and women. Perhaps because of this, Wollstonecraft’s work was not recognised for another century. Her daughter Mary Shelley however would go on to become a celebrated author of Frankenstein inheriting her mother’s incredible intelligence. Mary Wollstonecraft must be seen as a feminist pioneer, but constrained in her ideas by the culture of the time. For me, she is vital to the history of feminism.

1 thought on “Why Mary Wollstonecraft Matters, by Phoebe Macindoe”