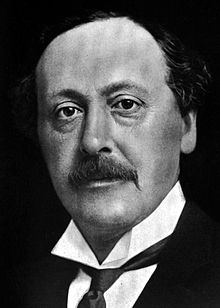 Liberal (under Campbell-Bannerman and Asquith)

Herbert was the son of William Gladstone (the great Victorian PM and, more than anyone, the founder of the modern Liberal Party). Like his father he had been educated at Eton and Oxford (where he got a first in History), before entering politics in 1880. Thus, by the time he became home secretary he was past 60 and had a long career behind him, much of it in the shadow of his father: it was Herbert who ‘flew the Hawarden kite’ (let the cat out of the bag about his father’s conversion to the cause of Irish Home Rule).

He also played a significant role in the Liberal landslide of 1906, having secured an arrangement with the new Labour Party known as the MacDonald-Gladstone Pact.

It was no surprise that Gladstone became Home Secretary nor that as such he played a significant role in the New Liberal reforms of that government, though much of the credit should also be given to his junior minister, Herbert Samuel. Nonetheless, the body of legislation was impressive. The Workmens’ Compensation Act of 1906, the coal-miners’ Eight Hours Act of 1908, and the Trade Boards Act of 1909 which introduced a minimum wage in a few industries all looked to improve the lot of workers. He also oversaw the Children Act of 1908 (the Children’s Charter) , which gave rights to children and established the principal of child protection; he oversaw the creation of borstals and children’s courts, and limited corporal punishment. He also created the probation system. He backed the police against the Suffragettes.

His undoing was one of the Edwardian era’s more bizarre controversies, a reminder of the way in which the Home Office can throw a banana skin under even the most capable of its holders. A Catholic procession in London led to disorder (a reminder of how potent a force anti-Catholicism still was), which earned him the enmity of the King. In the end, he was removed as a sop to Edward VIII (who now detested him).

He was made Governor-General and High Commissioner of the new union of South Africa. (Gladstone had been pro-Boer in the Boer War), then returning to Britain in 1914. He would go on to play a further role in trying to restore the shattered Liberal Party. He failed, and died at his home at Dane End, Hertfordshire, that I used to cycle past as a boy.

In his quiet way, Gladstone was a reforming and liberal home secretary, which makes him less usual than perhaps it should, as well as the link between the Liberaliusm of his father and the party’s near death experience that his coincided with.