By 1923, the new Irish Free State had collapsed into a brutal civil war. James Joyce’s father, John, was no lover of the new kind of nationalism that had given his country the Free State and four years of violent conflict. With typically mordant wit, he quipped to Joyce’s brother: ‘I told you, give them their Republic and they’d f*** it up’.

The root of the problem, as we Brits are finding out as I write, was that breaking up is hard to do. The break between Britain and Ireland that came in 1922 might teach us one or two things about the difficulty of untangling longstanding constitutional, legal, political and economic ties. Home rule, and the creation of the Irish Free State, came with the original version of the Northern Irish backstop, in the form of partition. It might also teach us something about the perils of wishful thinking, of what Roy Foster called ‘thinking from hand to mouth’, that so often bedevilled then history of Ireland and Anglo-Irish relations. To put it in current parlance, nationalist unicorns might not have been possible, but their part in bringing independence would do a whole world of damage.

Perhaps I need start to start by outlining the period and the events I am referring to (if you know all this, skip this section). As explained in the post on the home rule crisis in both Britain and Ireland (effectively part one of this series, here), 1912 saw a constitutional, political and paramilitary crisis in both the whole of the United Kingdom, and in Ireland. With the coming of war, that was crisis was put on hold. However, in Easter 1916, a small group of radical nationalists launched an armed uprising in Dublin. The Easter Rising was crushed, 16 of its leaders executed, thousands arrested and a form of military rule imposed. An attempt to introduce home rule, with the six counties of northeast Ulster excluded, failed to win the support of either side in 1917. Then, in 1918, with the military situation in France seemingly increasingly desperate, the government passed a Military Service Act to allow for conscription in Ireland (conscription was never introduced). The subsequent campaign against conscription saw Sinn Féin supplant the once all-conquering Irish Parliamentary Party as the party of nationalist Ireland.

The general election of 1918 saw Sinn Féin win 73 seats; they set up their own Irish parliament, Dáil Éireann, and no longer took their seats at Westminster. Then, between 1919 and 1921, the newly formed IRA launched a campaign of political violence; the government fought back. Best estimates put the death toll at around 2,000. A truce came in 1921. Subsequently, a treaty was negotiated.  That treaty created an Irish Free State, with dominion status (like the white dominions of the empire: Canada, Australia, New Zealand and South Africa). It also acknowledged the partition of Ireland, in which the six counties of northeast Ulster were excluded: they would become Northern Ireland.

The Dáil split over whether to accept the treaty or not. The pro-treaty side won the vote, and formed a government. The anti-treaty side broke away, and soon turned to violence: a ten-month civil war ensued, in which some 1,200 Irishmen were killed. The pro-treaty side won in the end, and the Free State survived. All that came at a price: the well of Irish political life would be soured for generations.

To put it simply, the withdrawal of Ireland from the Union and, subsequently, the empire was painful, difficult and far more complex than its proponents had envisaged, or admitted. One or two themes might suggest themselves in helping us understand this.

Facts of Union: Ireland and Britain before Independence

Before we come to them, we must acknowledge some facts. There were, as there are, some fundamental geopolitical and strategic realities, however unwelcome they were to some on all sides. The first was that the English crown, in one way or another, had ruled Ireland or parts of it since the 12th century, since 1800 as part of the United Kingdom. Furthermore, Ireland was a small nation, in the geopolitical embrace of a far larger neighbour, as it would have been whatever the political arrangements. By the turn of the 19th century, that neighbour was a great power and a world empire. British governments had some very big fish to fry.

There is an argument for saying that Ireland was never an easy fit in the United Kingdom, with its Catholic majority and its nationalist politics. If it was not an easy fit within, it was within, and getting it out in any sense would arguably prove more problematic than staying in. As it was, the separateness of Ireland meant that the little Irish fish would convulse Westminster politics on a regular basis.

For now, we are interested in looking at the issue in the other direction, the nationalist one. Like all forms of political nationalism (including English) Irish nationalism was never one to look facts straight in the face. The iron laws of economics were often an unpleasant fact from an Irish perspective. The Irish economy was hardly a runaway success story, and it was inextricably intertwined with the British. Then there were the human ties. The Irish diaspora reached across continents, but the largest part of it was closest to home, in Great Britain. Meanwhile, the Irish of all stripes had very strong personal, political and cultural ties with Britain.

Then there were other things that made everything so, literally, bloody difficult.

We might start with one particular group of the Irish in Ireland: Protestant unionists. The nationalist narrative always had an awkward fact to face. A substantial minority of the Irish did not want independence or home rule, and saw themselves as British: in short, they were unionist. Not all unionists were Protestant, and not all Protestants were unionist, but most were. In much of Ireland, Protestant unionists had once been the Protestant ascendancy, the ruling class; by the 20th century, they felt like, and in many ways were, an increasing embattled minority. As the article in this series on home rule noted, in the northeast the national minority were majority, though they felt no less embattled. 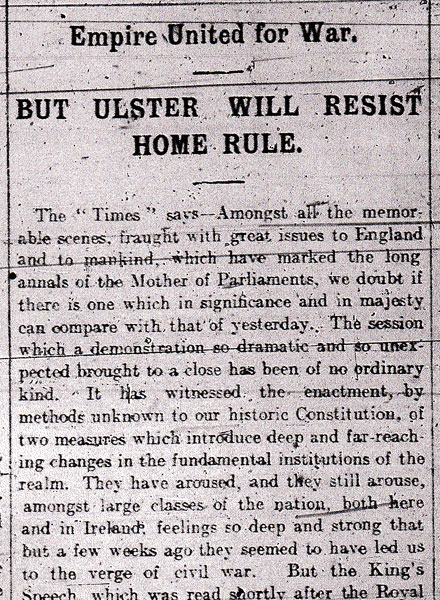 The nationalist response to this, as is so often the case with nationalisms, was to retreat into wishful thinking, or simply pretend that the problem wasn’t there. One strand of thought was the idea that unionists were simply deluded. The Proclamation of the Irish Republic, seen at the top, issued from the GPO in 1916, spoke of ‘differences carefully fostered by an alien Government, which have divided a minority from the majority in the past’. With the Brits out, it seems, Irish unionists would see the scales fall from their eyes, and realise their ‘true Irishness’. Others were more realistic, if in the blood and soil sense of turn of the century volkisch nationalism. The cultural commentator DP Moran famously said that the essence of Irish identity was the Gael, and that the Gael had to be the element that would absorb. To put it another way, other Irish identities were, in the end, not truly Irish, or at least not Irish enough. Famously, the Gaelic Athletic Association did not allow members to play ‘foreign’ sports. The Anglo-Irish (‘West Brits’), or southern working class Protestants, or northern unionists were not part of the volk. The other response, one pretty much adopted by the Irish Parliamentary Party, was to make the assumption that the unionist problem was Britain’s fault, and thus Britain’s issue to solve.

All of which ignored fact. The sectarian divide was deep. Irish Protestantism had a deep-rooted fear of ‘Rome rule’, of the domination of Irish life by a Catholic minority. Thus, the prospect of any form of Dublin government roused deep and atavistic emotions. The problem for unionists was that they were a minority. And we were now in the age of mass politics. Thus, as constitutional nationalist looked to Westminster to solve their unionist problem, Irish unionists looked to Westminster to save them from nationalism, and popery.

That had several whip hands, which they played well. The first was the Conservative party, which had styled itself the Unionist Party in opposition to home rule in 1886. For reasons explained here, and here, the Tory Party Bonar Law played opposition to home rule to the max. The Irish unionist leaders, Carson and Craig, had their man in Westminster. They also had their men all over Britain, as Carson’s campaigns in Britain saw many thousands sign the covenant to fight for the union. 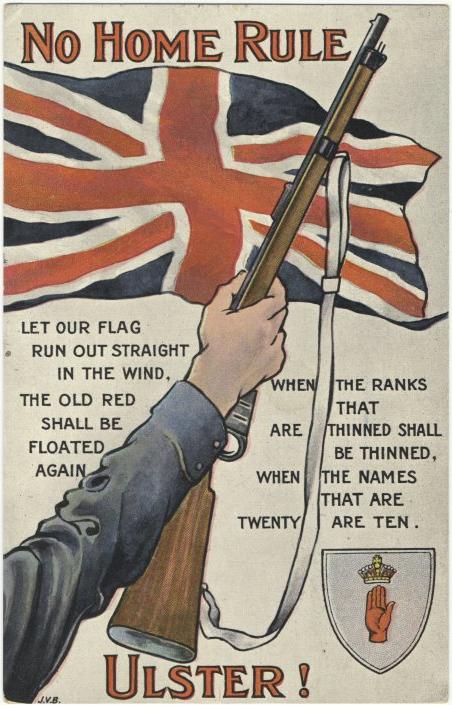 Their most potent weapon was Ulster. The four northeastern counties of Ulster, including Belfast itself, had Protestant majorities. For both Bonar Law and Carson, Ulster was a weapon to be deployed to stop home rule in any form. The mass protests, the covenant, the UVF and the threat of rebellion (or indeed rebellion itself) were a means to an all-Ireland end. It didn’t work that way, though. By the summer of 1914, the government were looking towards partition as a way out of the seemingly intractable problem. When the Home Rule Bill became law in September 1914, home rule was suspended for the duration of the war. The act, though, included ‘special provision’ for Ulster, though the precise nature of that northern Irish backstop was left carefully undefined. After the Easter Rising, there was an attempt to mollify Irish nationalist sentiment by introducing home rule during the war: the government’s proposal explicitly allowed for excluding the northeast from home rule (both the unionists and nationalists rejected the idea). By the time negotiations began in 1921, the Government of Ireland Act had all but created a separate Northern Ireland. In the end, Dublin was forced to accept partition as a fait accompli, the naked reality barely hidden by the fig leaf of future special arrangements: a boundary commission. What had happened was what has been called the Ulsterisation of unionism. Carson railed against it, sporadically, but he no longer mattered. Ireland would get its independence; Britain would get its peace. The price for both was what we might call the Ulster-only Northern Irish backstop.

Meanwhile, the Republican side, about to tear itself apart, had yet to define what independence actually was. That is for part two.